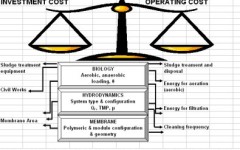 A meeting was held in November 2004 between Water Software Systems and Aquabio to discuss areas of mutual cooperation. During discussions Mr Steve Goodwin from Aquabio identified the critical need to quantify in real terms a better correlation between the factors determining flux decline or recovery for side stream configuration MBRs. In fact this same point applies to submerged MBR configurations as well. He raised this issue specifically since some of the plant they have installed have shown a large recovery in flux over a period of months without any apparent reason. This has occurred whilst plant base conditions during that period, i.e. cleaning regimes, control strategies, operating conditions, influent characteristics, remained largely unchanged. He hypothesised that this could only be explained by gradually changes in the sludge biomass composition itself which fouls and cakes the membrane surface. He further theorised that this biomass, which is made up of numerous species, could over time have a different community and species proportion and structure due to eventual acclimatisation. Certain species or bacterial strains would eventually predominate which morphologically speaking decreased the extent and nature of membrane fouling by the extracellular polymeric substances (EPS) they excrete. Hence this area needs serious investigation because electricity tariffs are dramatically rising and if the microbiological conditions that lead to flux recovery and reduced fouling could be identified then this would have a huge implication on flux throughput and plant operating costs. He additionally noted that this knowledge could also be used to improve upon his current plant design procedure. Incidentally Aquabio employ the whole life costing approach when it comes to design, which means balancing membrane investment cost against predicted operating cost over the design life of the plant.

Wider adoption of MBR technology has been limited in the UK due to cost restrictions arising from expensive membrane modules and operational costs. The proposed research addresses the principal barriers to the development of the MBR technology, as it attempts to optimize the use of ceramic tubular, immersed hollow fibre, and flat plate membrane modules and improve filtration performance. In essence the proposed research will investigate the phenomenon of membrane fouling in an in-depth fashion and determine the extent and type of fouling agents formed in side stream and immersed MBRs, i.e. concentration of EPS. Consequently the impact of various operational and design parameters, such as retention times, organic loading rates, and temperature on membrane performance will be explored. Overall performance and specific pathways of membrane fouling will be compared for each operational mode. Inorganic and organic fouling agents will be identified and monitored by sampling. This work will provide a greater understanding of the process fundamentals of MBR technology and, in doing so; open the door for cost savings and technology development opportunities.

The main objectives of the project are: